I got an e-mail with a link to an article in today’s Guardian about the irrepressible and inspiring Jess Wade just before I went to get my afternoon cup of tea. I’ve rushed back, tea in hand, to quickly blog and say how delighted I was to see Jess’ efforts recognised not only by my favourite newspaper — I know, I know, typical sandal-wearing, muesli-munching, beardy, lefty, Cultural Marxist, Guardian-reading academic [1] — but also by the recent award of the Institute of Physics’ Daphne Jackson prize.

As the Guardian article describes, Jess is a postdoc working in the field of organic electronics at Imperial College. I have been aware of Jess’ work and her efforts in public engagement and the promotion of physics to girls for quite some time but most recently met her at a SciFoo ‘unconference’ at the Googleplex, Mountain View, CA (which was …checks diary…almost a year ago. Wow. Time flies.) Jess led a session on gender balance and diversity in science and it was easily the most energetic and engaging session of the entire conference (and that’s saying something, given the competition).

I had brought a copy of Angela Saini’s Inferior with me to read on the plane to SciFoo. Inferior, a t-shirt of whose cover Jess is proudly wearing in the photo accompanying the Guardian article, was deservedly Physics World’s Book Of The Year 2017. (Here’s Jess’ review). Jess had brought about ten copies of Inferior with her to the SciFoo event which she distributed for free at the session! (I should stress that Jess is neither on commission nor did she have a grant from which to buy the books — she bought them with money out of her own pocket.)

I am pleased to say that Jess will be coming to Nottingham Physics & Astronomy later this year to give a talk on her research and that Angela Saini will be speaking to the Science Faculty here for International Women’s Day 2019.

Now, usually the last place you want to spend any time online is below the line, even when it comes to The Guardian’s comments section (as Philip Ball has pointed out). But it’s worth scanning down through the comments under Jess’ article for comedy value alone. The same tedious, uninformed, unscientific, zombie ‘arguments’ about gender balance that are rebutted so well in Inferior (and in Cordelia Fine’s work) are trotted out by rather disgruntled individuals who have a particularly buzzy bee in their bonnet about the natural order of things. I particularly liked this exchange: 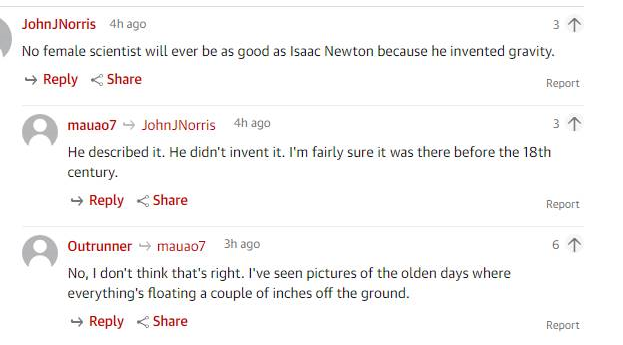 I’d really like to hope that JohnJNorris’ comment up there is a pitifully weak attempt at a joke. But given the below-the-line commentary that accompanies virtually any article on gender in science, it’s not against the odds at all that JohnJ is being deathly serious.

“Outrunner’s” riposte is priceless in any case…

[1] OK, most of that’s true. But not the sandals. Definitely not the sandals. I’ve never worn sandals in my life. *shudder* And, to be honest, I’m really not quite certain what a Cultural Marxist is. Or does. But, apparently, academia is absolutely infested with them.

Physicist. Metal fan. Father of three. Step-dad to be. Substantially worse half to my fiancée Lori, whose patience with my Spinal Tap obsession goes to far beyond 11... View all posts by Philip Moriarty

One thought on “Jess Wade: Scientist on a Mission”