This is a guest post by my friend and fellow physics enthusiast, David Domminney Fowler, previously published at http://www.frontbenchpolitics.co.uk. (Dave’s personal website is http://www.daviddomminney.com/ ). What Dave says below resonates very strongly with me, and as the “rules of engagement” problem is something I’ve thought about a great deal over the last while, I was keen to re-blog his post here at “Symptoms…”

Dave and I have enjoyed the occasional ever-so-brief discussion on the central theme of his post, and I would say our views are very closely aligned. (Indeed, I think the only very minor point on which Dave and I are perhaps not in complete agreement is with regard to the intellectual clout and substance, or lack thereof, of a certain JB Peterson.) The game theory parallel outlined by Dave below is a compelling argument.

Over to you, Dave…

I’ve been struggling for a while now with a question.

How is it that seemingly intelligent, and in some cases extremely intelligent people, seem to draw wildly different conclusions and disagree to the point of being illogical?

Why is it that Steve Bannon and Stephen Fry, both of which are extremely intelligent can disagree about so much when they no doubt have a lot of the same data to draw their conclusions from?

How can Jordan Peterson and Sam Harris, two of the world’s leading public intellectuals disagree on so many fundamental issues, even on the nature of truth?

I think some of this can be explained by thinking about games.

Take chess for example. A player wins when the other player either gets checkmated or resigns.

They are the rules.

If one player doesn’t agree that they are in checkmate then they haven’t accepted the rules.

Now with chess that’s easy to argue as there are set rules, but when you are talking about the complexity of 7 billion people all trying to construct society with only the laws of physics as a boundary things aren’t quite so simple.

People then tend to act based on the rules they think are appropriate, they dream up, or they’re too scared to break.

This is where game theory comes in, or at least the origins of it.

Game theory was originally a study focused on zero sum games, written by mathematician John Nash. You may have heard of him, he had a film made about him called “A Beautiful Mind”. If you haven’t seen it, you should.

Anyway, a zero sum game is basically one that means if one side gains a few points, the other side lose a few. Every win or loss is a cost or benefit to the opponents.

Imagine a mile long beach. There are 2 drink sellers that have an informal agreement to sell to half the beach each, so they each set up a quarter of a mile from an end.

On day two, one edges slightly closer to the centre. This creates an advantage as one seller covers more beach than the other.

So on day 3 the other also edges to the centre, but predicting that this was a likely reaction they both end up edging closer to the centre.

How many days do you think it will take before they are both back to back in the centre?

This position is called the “Nash Equilibrium”. Neither side has an advantageous move.

A non zero sum game is something where all participants end up receiving a benefit, like a well written trade agreement or falling in love.

Imagine a world where things are so complex that you have 7 billion people with 7 billion different ideas on what the rules of the game are.

Imagine a world where some people are seeing situations as zero sum games and others are not.

I think that is partly why we have so much confusion and seemingly contradictory ideas coming from some of the finest minds.

At this point one has to take into consideration individual skill sets. Everybody looks at problems with their own lenses focused using their experiences.

It’s not surprising that Elon Musk sees the world as potentially a computer simulation, from his perspective there is evidence everywhere, but that’s because he sees things through a computing, engineering and physics lens.

It’s also not surprising that people without any significant science or maths training tend to see the world in a much more analogue and in some cases romantic way.

Using Steve Bannon as an example. Love him or hate him or in-between, he’s an incredibly clever guy.

If you don’t know who he is, he’s by many considered the real brain behind the Trump movement and many other nationalist movements around the world.

He was a military man, then worked for Goldman Sachs before co founding media company, Breitbart News.

In the military most things are zero sum games. If one side wins the other loses. Yes this is an over simplification but in general it’s true.

Anyone that has degrees in economics or business studies game theory. It’s essential for all modern day bankers, and he holds masters degrees in these areas.

So it’s no wonder that Bannon views everything through the lens of his zero sum game training, it’s probably his best skill.

Whilst away on a break thinking about writing this I happened to catch part of “The Boss Baby”, a movie that summed up game theory and the dangers of perceiving non zero sum games as zero sum games.

It’s a kids film but it’s lesson is no less accurate. The Boss Baby tries to argue that there is a finite amount of parental love and if more things (like puppies) need love they’ll be less for the children. Obviously it ends well with the lesson not to misidentify such games. A great lesson for kids.

If you think that for your nation, to do well, others have to do less well, then you probably see such things as a zero sum game.

If you think that for your nation to succeed every nation has to succeed and we can all improve our standards of living by working as a team, then you probably don’t see things as a zero sum game.

If you see all global and national power and influence structures as a combined force, a hidden hand steering the world without revealing their true identity then you probably see a lot of zero sum games.

So next time you are in an argument or debate with someone that vehemently oppose what you are saying, yet you know they are indeed a rational and intelligent person and you question how they cannot see what you see, think about it in terms of rule differences.

Do you know the rules of the game?

Are there set rules?

Is it a zero sum game?

What are the consequences of misidentifying the rules?

My personal opinion is whatever debate we engage in, the rules are fluid and it’s very easy to be disorientated by the complexity. This is why sometimes different voices with different outcomes are important to create balance, as no one group or person can calculate their position based on every rule, but a collection of people lensing problems through their own skill sets can be a great thing.

Where this goes wrong is when an influential person or group misidentifies the game, either through their own lens bias or for personal gain, then they influence others to see their rules as the game and ignore the possibility of other better fitting rule sets.

Do games become different depending on the lenses of the participants? I’m sure they do.

Life is not chess, there are no set rules, it’s possible for one person to hail an individual as a hero and another to see the same person as evil.

Let’s spend less time thinking opponents are crazy and more time discussing how they reached their rules of the game.

(…or should that be The Aussie Pinkcast?)

Dave and I had a blast…

A truly wonderful day recording podcasts with the one and only Prof. Philip Moriaty of @sixtysymbols fame. #sixtysymbols #physics pic.twitter.com/he4ajElcB0

Not only is Dave an exceptional musician, but as I’ve mentioned before, he could very easily steal the mantle of “nicest guy in rock” from a certain Dave Grohl. He and I spent six or so hours playing guitar and nattering at length over copious amounts of tea. (It should be said that Dave has one or two guitars at his disposal… 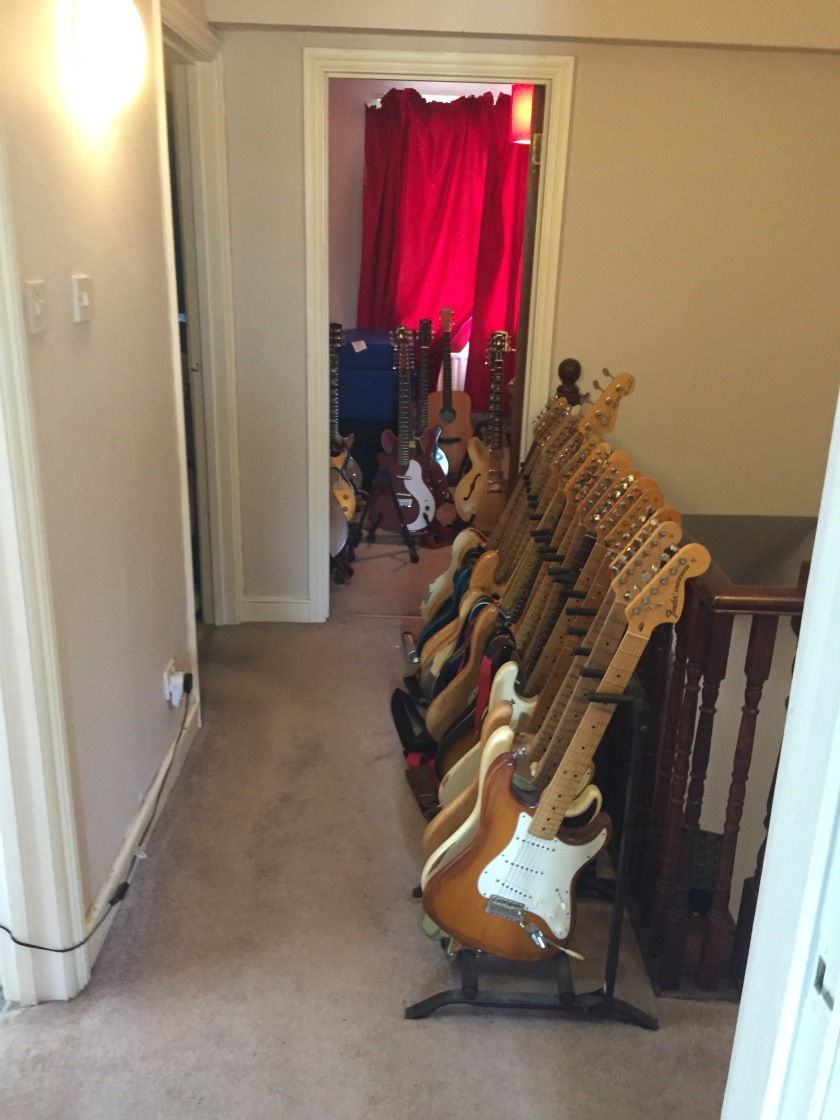 …and that’s certainly not all of ’em.)

The first of those podcasts, #4 in the Australian Pink Floyd series, was uploaded yesterday. Here’s the YouTube version, but it’s also available via a stream at the Aussie Pink Floyd site and via iTunes. Be warned, it gets a little bit “physics-y” in the first half — Dave and I are both massive Fourier analysis fans so we got perhaps (possibly, maybe) a little too carried away by the technical detail. It all settles down in the second half…

The second podcast was for Dave’s upcoming new (and yet unrevealed…) project. This featured discussions about social media (and social media shaming), tribalism, the Peterson-Harris ‘debate’ that Dave attended the night before, thunderf00t, sexism, and the greatest ever guitarists. (Some of Dave’s choices really surprised me. A man of eclectic tastes…) And that was just for starters. If and when the podcast appears online, I’ll certainly blog about it!

Thank you, Dave, for such a great day in Sidcup. (And there’s a sentence I never thought I’d write…)

All this machinery. Making modern music. Can still be open-hearted.

From “The Spirit Of Radio”, Rush. Lyrics by Neil Peart.

On Tuesday evening I had the immense pleasure of attending The Australian Pink Floyd gig at the Royal Concert Hall in Nottingham. It was a remarkable concert — stunning musicianship, awesome (literally) visuals, and beyond-impressive interpretations of Pink Floyd classics.

What made the gig extra special for me was that I had the opportunity to spend quite a bit of time backstage at the invitation of the Aussie Floyd’s guitarist, David Domminney Fowler. Despite his hectic touring schedule, Dave finds time to pursue interests in physics, maths, and the music-maths-physics interface. For example, he’s worked with Sean Riley on the Computerphile YouTube channel, including this fascinating video on translating visual information to music:

I’ve worked with Sean for a recent Sixty Symbols project and have similarly thoroughly enjoyed collaborating with him on a Computerphile video in the not-too-distant past, so was delighted when I got an e-mail asking if I’d be interested in meeting up with Dave when the band played Nottingham. I, of course, jumped at the chance.

Dave talked me through his impressive guitar rig (and variety of guitars) before the gig, and even generously gave me the opportunity to try out a few of his ‘axes’ (including his beloved Telecaster; I’d not played a Telecaster before). What particularly struck me was Dave’s forensic attention to detail in capturing the Floyd sound. Some of this was due to the signal processing — there were a number of classic analog pedals and kit on the way from the guitar to the amp — but the vast majority came from Dave’s exceptionally tasteful and accomplished playing. You can see what I mean in this video:

If you’ve not yet seen The Australian Pink Floyd, I thoroughly recommend them. I’ve run out of superlatives to describe ’em. Trust me, you won’t be disappointed -Dave’s Comfortably Numb solo is worth the ticket price alone.