…we’d have to get up for a morning tutorial at ten o’clock at night, half an hour before we went to bed… complete all 171,117 problems in each of Schaum’s Outline series on partial derivatives, fluid mechanics, and vector analysis before breakfast… work twenty-nine hours in the undergraduate lab (and pay the lab organiser nineteen and six for the privilege)… and when we got back to the halls of residence, the Hall Tutor would kill us and dance about on our graves while reciting Chapter 1 of Feynman’s Lectures In Physics, Vol I.

[With all due credit to Messrs Cleese, Chapman et al.]

There’s yet another one of those irksome hand-wringing “…tsk, kids these days…” articles in the Times Higher this week. Here’s a sample:

Even science students seem to struggle with mathematics. During my last few years of teaching in the UK, I was aggressively confronted by science undergraduates because I tried to engage them in an exercise that required them to calculate percentages. I was told that this was unreasonable because they were not, after all, doing a maths degree.

In twenty-one years of undergraduate science teaching (to date) I have not once encountered a student who baulked at the calculation of percentages. Granted, I usually teach physicists, but I’ve also taught chemists, chemical engineers, biomedical scientists, and pharmacy students. (I should note that I’m also not the least cynical academic teaching at a UK university.) The reactionary “eee by gum, they don’t know they’re born” whining is teeth-grindingly frustrating because it does a massive disservice to so many of our students.

Last week (as a Christmas, um, …treat) I decided I’d ask my first year tutorial group to attempt questions from an exam paper from 2001. I have done this for the last four or five years so it’s becoming a bit of a festive tradition. Here are two of the questions: 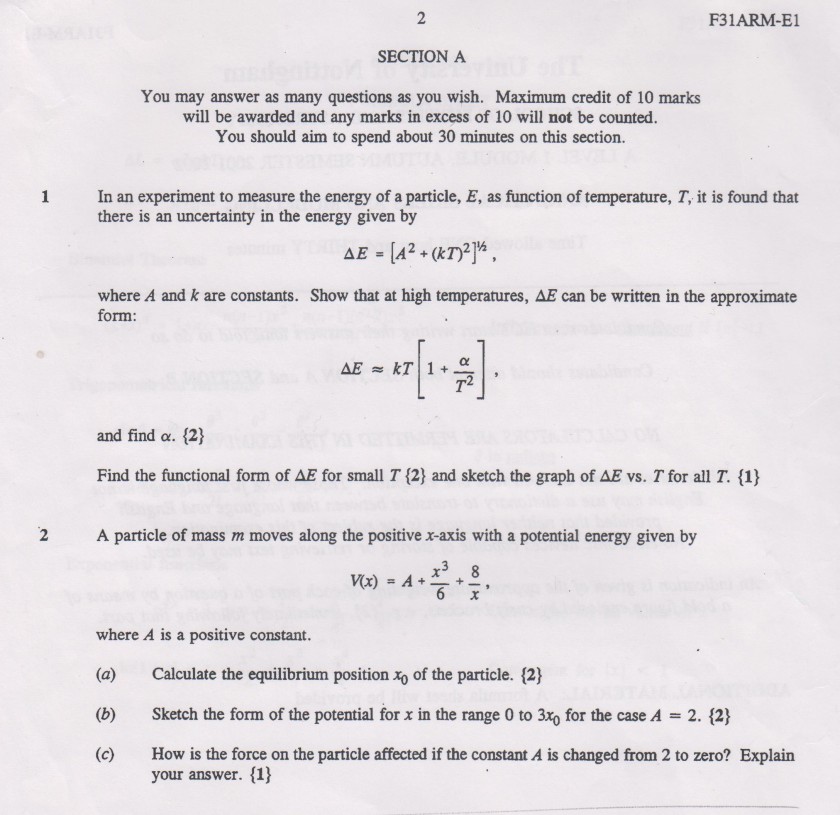 My tutees tackled these questions, and others, with quite some aplomb, despite the paper having been set when they were still in nappies. You may note that the questions involve mathematical (and physics) reasoning significantly more sophisticated than the calculation of percentages.

Deficiencies in the secondary/high school education system are too often lazily attributed to a lack of engagement or effort from students; that THE article is, of course, only the latest in a long line of Daily Mail-esque “We’re going to hell in a hand-cart” polemics in a wide variety of online and traditional forums [1]. In my experience, student ability or commitment has most definitely not dropped off a cliff at some point during the last two decades. Indeed, students are instead generally much more focused now due to the imposition of the £9250 per year fee regime; too focussed in some cases, many would say.

So let’s put the pearl-clutching to one side for a while and instead highlight the positives in higher education: the talents and tenacity of our students. In the midst of the madness that is Brexit, let’s not succumb to the lazy narratives and sweeping generalisations that characterise so much of public debate right now. After all, don’t we teach our students that critical thinking and evidence-based reasoning are core to their education?

[1] …or fora for those who are particularly pedantic and especially wedded to that fifties idyll of Latin as it should be, dammit. (Sorry, “damn it”. (Oops, sorry again, make that deodamnatus.))